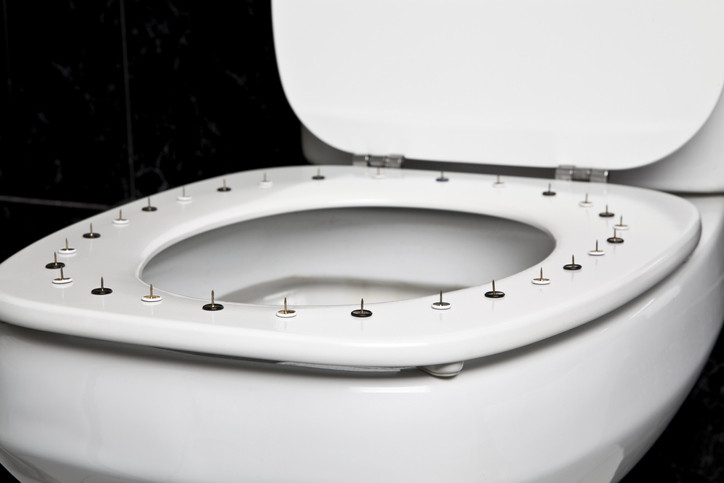 Hemorrhoids are usually caused by increased pressure due to overweight, or chronic constipation with straining during bowel movements. By age 50, about half the population has experienced one or more of the classic symptoms, which include rectal pain, itching and bleeding during the bowel movements. Although hemorrhoids are rarely dangerous, they can be recurrent and painful.

Hemorrhoids are pillow-like clusters of veins that lie just under the mucous membrane lining of the rectum and anus. The condition most of us call hemorrhoids develops when those veins become swollen and distended, like varicose veins in the legs. External hemorrhoids can be extremely uncomfortable as the overlying skin can become irritated and eroded. If a blood clot forms inside an external hemorrhoid, the pain can be sudden and very severe. It might feel like a firm lump around the anus. Once the blood clot dissolves, the external hemorrhoids turn into a skin tag. Skin tags around the anus may get very itchy and uncomfortable. Internal hemorrhoids are typically painless, but as they grow in size, they can easily bleed during bowel movements. It is common for patients to complain of bright red blood on the toilet paper or dripping into the toilet bowl after defecation. Internal hemorrhoids may also prolapse, or extend beyond the anus, causing several potential problems. When a hemorrhoid protrudes, it can collect small amounts of mucus and tiny stool particles that may cause an irritation called pruritus ani. Pruritus Ani is a medical term for excessive itching in the anal area. Wiping constantly to try to relieve the itching can worsen the problem. Patients with chronic constipation are typically prone to have hemorrhoids. Straining during bowel movements and prolonged sitting on the toilet interfere increase the blood flow to the hemorrhoids and make them enlarge. As hemorrhoids get larger, they tend to bleed and prolapse.

A number of small outpatient procedures are available to treat hemorrhoids.

The most common hemorrhoid treatment in the United States is rubber band ligation. A small elastic band is placed around the base of a hemorrhoid in doctor’s office. The band prevents hemorrhoids to get filled with blood and causes them to shrink completely. Other office procedures include laser or infrared coagulation, sclerosing therapy and cryosurgery. Persistently symptomatic external hemorrhoids or recurrent internal hemorrhoids despite rubber band ligation treatments might require a surgical removal either through an incision, a procedure called a hemorrhoidectomy; or using a surgical stapling device, a procedure called stapled hemorrhoidopexy. Typically, these procedures are done under general anesthesia.

The best way to prevent hemorrhoids is to prevent constipation. Therefore, typical recommendations are high fiber diet, good hydration, exercising, avoiding prolonged sitting on the toilet, and use of daily fiber supplements.

Do I have a hemorrhoid?

You may have a hemorrhoid if you are experiencing the classic symptoms such as rectal pain, itching, and bleeding during bowel movements. External hemorrhoids can also cause pain and discomfort around the anus due to the formation of a blood clot inside the hemorrhoid, as well as due to irritation of the overlying skin. Internal hemorrhoids are not usually painful, but they tend to cause blood to drip in the toilet bowl after defecation. As hemorrhoids get larger, these symptoms may become more severe. To determine if you have a hemorrhoid, schedule a consultation with Dr. Bortecen of SoHo Men’s Health today.

How are hemorrhoids diagnosed at SoHo Men’s Health?

How are hemorrhoids treated at SoHo Men’s Health?

At SoHo Men’s Health, Dr. Bortecen provides a number of minor outpatient procedures to treat hemorrhoids. One of the most common treatments for hemorrhoids is rubber band ligation. This procedure is executed by placing a small band around the base of the hemorrhoid in order to cut off their blood supply and cause them to shrink completely. Other office procedures for treating hemorrhoids can include: laser or infrared coagulation, sclerosing therapy, and cryosurgery. In some cases, persistent or recurring hemorrhoids may also be surgically removed using a hemorrhoidectomy.

Ready to Get Started?

View All Google Review
Dr. Bortecen was extremely professional and detail oriented. He was able to quickly diagnose and treat an infection that proved to heal seamlessly. He follows up with his patients regularly, and is sure to make himself available on very short notice. Will be recommending him to others.

K.G.Google
Dr. Bortecen is an excellent doctor. He is measured and very practical. I particularly like how he thorough he is in determining an appropriate course of action. On a personal level, he is a kind individual with a great sense of humor - actually look forward to our sessions.

R.D.Google
It has been such a relief to work with Dr. Bortecen since my first visit. He is highly professional and especially caring, he follows up personally to ensure that any health issue or concern has been addressed and encourages continuous improvement. I can not recommend this doctor enough to anyone with any health concern or question.

O.S.Google
I will most definitely be going back to SoHo Men’s Health to see Dr. Bortecen. The whole experience was pleasant and the results have been spectacular. The professionalism of Dr. Bortecen really blew me away and his suggestions were terrific. I’m glad I made this appointment and will be doing more treatments here.

M.P.S.Google
Dr. Bortecen is a kind, considerate and thoughtful Doctor with amazing bedside manner and exemplary worldwide experience. He takes his time and really listens to the patient which is often rare in NYC. He is an expert at what he does and I feel fortunate to have found his practice.

J.L.Google
I've had a fantastic experience with Dr. Bortecen and SoHo Men's Health. Not only have I had great results, but Dr. Bortecen is an extremely kind, patient, and thorough doctor who will consistently go the extra mile for his patients. I highly recommend the clinic, it is a true gem in NYC!

P.C.Google
Dr. Bortecen and the team at SoHo Men’s Health are beyond amazing. They provide personalized and highly skilled service at affordable prices. Above all, the experience is comfortable and stress free in a modern suite with the latest equipment and procedures. Highly recommend!

P.S.Google
I had an exceptional experience with Soho Men's Health and would highly recommend their services. Dr.Bortecen is kind, compassionate, and works with his patients to develop treatment plans that aligns with their lifestyle.

Please note, we are out of network. Upon request, we will provide you a detailed breakdown and coding should you wish to make an insurance claim.